Mental Fabrications is an experimental Architectural tooling exhibit, that tries to explore the digital realm as a tool which can generate physical models textures, and surfaces. This exhibit is a scaled version of concepts with a greater application. The intended finality is that of interior surfaces, and building facades becoming reactionary, responsive and dynamic with the occupants and their programmatic usage. The collateral outcome is that of aesthetic sculptural models.

As humans we understand our environment through the spectrum of our senses, but that does not mean there are no other unperceived realities that we are unaware of.  By developing  new technologies we have always augmented out abilities beyond our biological parameters. This exhibit tries to focus not on the physical extension we are developing but the intellectual and mental fabric.

By the use of technology we are able to add to our five traditional physical sensorial tools, This exhibit tries to create a digital computer code to translate thought patterns directly into the physical world. This will be done as a subconscious move, intentionally skip the rational, and the filter of the conscious mind that implements subjective personal preference to the aesthetic result. This play between the human to non human interactive exhibit is an exploration into the potential of the fields of architecture visual arts and design to create a perpetually living object. one that has the potential to change as we change.  The Computer code is a building block just as living biology is made up of DNA base pairs, we are creating a digital set of base pairs, that can start to self organize in an variety of ways. The external influence of the individual mind will become an attractor to determine this sequence and final outcome.

There are three main chapters of the exhibit that create a metaphoric feedback loop, all linked together in a common goal to bring awareness to the concept and try to turn it on as many faces as possible.

Area one: Is an isolated booth that an individual occupant will watch an abstract film (fig 1, a,b,c.) that stimulates brain activity in specific moments. This data will then be used to generate a topography of the mental landscape (Fig 2a).In real time as the landscapes are fabricated, by the occupant inside the “pod” as they are watching the film, the landscape will be projected on a wall. This projection will be shown to the exhibit public.  These digital landscapes will then be the basis for area Two.

Area Two: This next segment is made up of 3D Printed models of the mental landscapes. This area will show one finished landscape(a) , and one landscape with all its exploded assembly process(b).  Along with this part of the exhibit there will be another five smaller models that represent potential species created to inhabit these landscapes (fig 3 a,b).(This portion of the exhibit is still under construction as this document is being written)

Area Three: and final area is the mapping of activity during the exhibit. The collective experience and interaction of the guests to the show and each other. this

activity will be projected on the full and final topography model. Visually this will be a series of points and connecting lines. Each point represents a guest. From  each guest a line will connect the closest and furthest other guests showing proximities and groups that gather and cluster together. same as the thoughts group and cluster together creating the topography, that is the reason why this is going to be projected on the final model.  This last projection connects the individual experience and perception to that of the mass, closing the link in the loop. 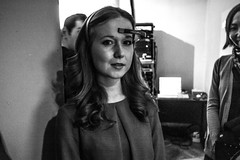 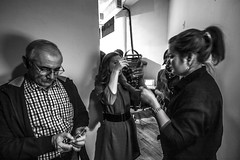 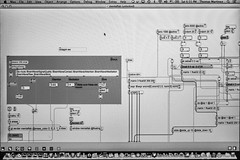 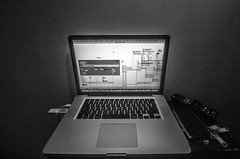 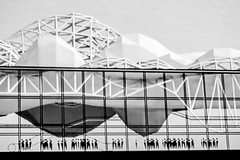 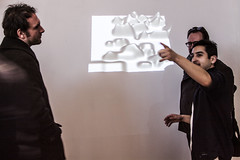 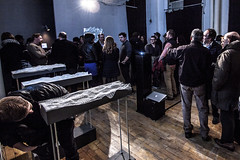 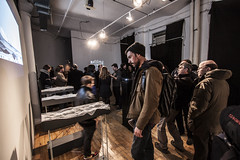 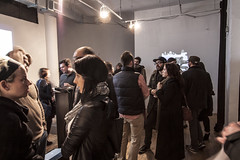 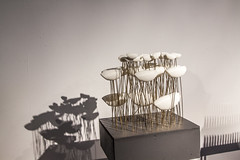 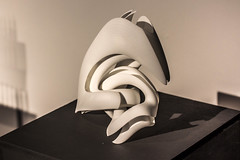 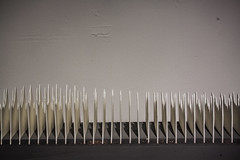 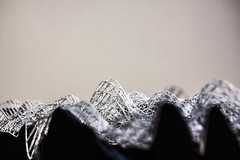 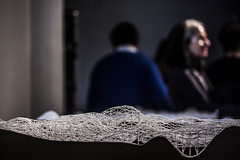 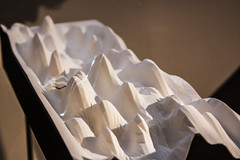 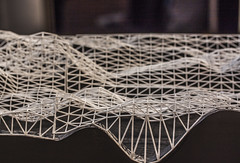 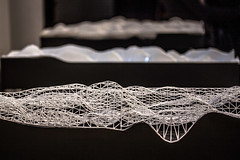 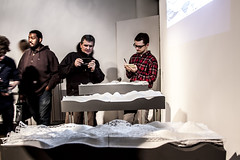