[May 31-June 2] Robosonic Eclectic: Live Music by Robots and Humans

LEMUR: League of Electronic Musical Urban Robots presents its first concert series consisting entirely of works commissioned for LEMUR’s musical robots. Titled Robosonic Eclectic: Live Music by Robots and Humans, the program will be performed during a three-night run, from Thursday May 31 through Saturday June 2, 2007, each night with a start time of 8 pm. These performances will feature live pieces by John Flansburgh and John Linnell of They Might Be Giants, JG Thirlwell of Foetus, Jazz Trombonist and MacArthur Fellow George Lewis, and Electronic Music Pioneer Morton Subotnick. Live works will run about 8-10 minutes in length and feature a live performance component by the composer(s) of the piece. Pieces for solo robots by R. Luke DuBois and Brendan Adamson will also be performed by the robot ensemble. These interleaved pieces will run about 5 minutes in length. The total concert length will be 75-90 minutes, including introductions and discussion of works.

The series will take place at the Mainstage Theatre at the new 3-Legged Dog Art and Technology Center (http://3ldnyc.org). Robosonic Eclectic is presented as part of the New York Electronic Art Festival (NYEAF), a month-long celebration of cutting-edge electronic music performed at various venues from May 12 – June 10, 2007.

The series is presented in collaboration with Harvestworks Digital Media Arts Center (http://harvestworks.org). The series is funded in part by the Rockefeller Foundation Multi-Arts Performance (MAP) Fund. Robosonic Eclectic’s pieces by George Lewis and Morton Subotnick are generously commissioned by LEMUR and Harvestworks with funds from the Multi-Arts Production Fund.

Tickets are $20 and available online now from Brown Paper Tickets at www.brownpapertickets.com.

LEMUR is a Brooklyn-based group of artists and technologists developing robotic musical instruments. Founded in 2000 by musician and engineer Eric Singer, LEMUR creates exotic, sculptural musical instruments which integrate robotic technology. LEMUR’s philosophy is to build robots that are instruments as opposed to robots that play existing instruments. LEMUR’s growing ensemble includes over 50 robotic instruments. GuitarBot, an electric stringed instrument, is comprised of several independently controllable stringed units which can pick and slide extremely rapidly. ModBots are a large collection of modular percussion robots in a variety of styles and functions, including beaters, singing bells, and shakers. The Ill-Tempered Clangier is a robotic xylophone-like tubular bell instrument which clangs percussive melodies on forty-four tuned metal pipes. ForestBot is comprised of a forest of egg-shaped rattles sprouting from long rods that quiver and
sway over onlookers. TibetBot is designed around three Tibetan singing bowls struck by robotic arms to produce a range of timbres. Visit LEMUR’s website at www.lemurbots.org.

MacArthur Fellow George Lewis is currently Edwin H. Case Professor of Music at Columbia, having previously taught at UC San Diego, Mills College, the School of the Art Institute of Chicago, and Simon Fraser University’s Contemporary Arts Summer Institute. He has served as music curator for the Kitchen in New York, and has collaborated in the “Interarts Inquiry” and “Integrative Studies Roundtable” at the Center for Black Music Research (Chicago). A member of the Association for the Advancement of Creative Musicians (AACM) since 1971, Lewis studied composition with Muhal Richard Abrams at the AACM School of Music, and trombone with Dean Hey. An active composer, improvisor, performer and computer/installation artist, Lewis has explored electronic and computer music, computer-based
multimedia installations, text-sound works, and notated forms. His artistic work is documented in over 120 recordings and has been awarded by a 2002 MacArthur Fellowship, 1999 Cal Arts/Alpert Award in the Arts, and numerous fellowships from the National Endowment for the Arts. 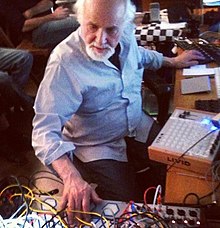 Known as a grandfather of electronic music, Morton Subotnick is one of the pioneers in the development of electronic music and an innovator in works involving instruments and other media, including interactive computer music systems. Most of his music calls for a computer part, or live electronic processing; his oeuvre utilizes many of the important technological breakthroughs in the history of the genre. In addition to music in the electronic medium, Subotnick has written for symphony orchestra, chamber ensembles, theater and multimedia productions. Currently, Subotnick holds the Mel Powell Chair in Music at the California Institute of the Arts. He tours extensively throughout the U.S. and Europe as a lecturer and composer/performer.

Combining a knack for infectious melodies with a quirky, bizarre sense of humor and a vaguely avantgarde aesthetic borrowed from the New York post-punk underground, They Might Be Giants became one of the most unlikely alternative success stories of the late ’80s and early ’90s. Musically, the duo of John Flansburgh and John Linnell borrowed from everywhere, but their freewheeling eclecticism was enhanced by their arcane, geeky sense of humor. They Might Be Giants released their eponymous debut in 1986, and the album became a college radio hit. Two years later they released Lincoln, which expanded their following considerably. Their third album, Flood, worked its way to gold status. They celebrated their 20th anniversary in summer 2002 with the release of their first children’s album, No! Early in 2005, Here Come the ABCs and its accompanying DVD were the band’s first releases for Disney Sound. The inscrutable JG Thirlwell was dropped on this planet some time ago to bestow sonic majesty, chaos, violence & beauty and cunning linguistics on an unsuspecting earth. A Brooklyn-based Australian expat, Thirlwell has used many names for his many visions: Foetus (and its many name variations), Steroid Maximus, Clint Ruin, Wiseblood, DJ OTEFSU, Manorexia and Baby Zizanie. His multitude of influential recordings under the name FOETUS and variations thereof, has amassed a rabid world-wide cult following. Over the course of more than a dozen albums he has stretched from yearning orchestral soundscapes, meticulously organized chaos, electronic swathes, blistering big band pastiche, crunching hard rock and even inventing stupefying collisions of genres and forms with a raw emotion and irresistible musicality. More recently JG has also branched out into audio installations (the freq_out project curated by CM Von Hausswolf, with whom he also conducted an audio workshop at the Stadelschule in Frankfurt), DJ-ing (as DJ Otefsu), has appeared in an opera (Der Kastanienball in Munich in 2004, directed by Stefan Winter), has scored a cartoon series for The Cartoon Network in the USA (The Venture Brothers), and recently completed a commission for Bang On A Can. In 2005, he wrote his first commission for Kronos Quartet, which premiered in 2006.

R. Luke DuBois is a composer, performer, video artist, and programmer living in New York City. He holds a doctorate in music composition from Columbia University and teaches interactive sound and video performance at Columbia’s Computer Music Center and at the Interactive Telecommunications Program at New York University. He has collaborated on interactive performance, installation, and music production work with many artists and organizations including Toni Dove, Matthew Ritchie, Todd Reynolds, Michael Joaquin Grey, Elliott Sharp, Michael Gordon, Bang on a Can, Engine27, Harvestworks, and LEMUR, and is the director of the Princeton Laptop Orchestra for its 2007 season. He is a co-author of Jitter, a software suite developed by Cycling’74 for real-time manipulation of matrix data. His music (with or without his band, the Freight Elevator Quartet), is available on Caipirinha/Sire, Cycling’74, and Cantaloupe music, and his artwork is represented by bitforms gallery in New York City.

Brendan Adamson’s compositions and interactive works are informed by the superhuman performance requirements of works by Conlon Nancarrow and others, but employ recently developed capabilities of such robotic instruments as modern self-playing pianos, recent automated organs, and musical robots created by LEMUR. As an undergraduate student, Brendan presented his “impressive compositions” (The New York Times) at Juilliard’s first ever all-robot-performed concert, RoboRecital. In addition to numerous performances in the United States, his music has been performed by robots at international festivals around the world, including those in Belgium, Poland, Lithuania, Mexico, and Japan. Brendan holds a Bachelor’s degree in music composition from the Juilliard School. A native of West Palm Beach, Florida, past teachers include Nils Vigeland, Christopher Rouse, Mari Kimura, and Milton Babbitt.