In the algorithmic work, “Optical De-dramatization Engine (O.D.E.) applied in 40-hour cycles to Thomas Ince’s ‘The Invaders’, 1912”, 20 frames were sampled from each minute of Thomas Ince’s 40-minute film. The O.D.E. software (coded in ActionScript) takes each sampled minute and dynamically extends it to one hour. At the end of 40 hours, the cycle repeats.

In “Optical De-dramatization Engine (O.D.E.) applied in 15-hour cycles to Ma-Xu Weibang’s ‘Yeban gesheng’ (Song at Midnight), 1937”, 900 frames were sampled from the 113-minute film. The O.D.E. software takes 450 pairs of sampled frames and dynamically extends each pair to two minutes. The sequence of 450 pairs programmatically changes in appearance across 15 hours. At the end of 15 hours, the cycle repeats. There is one potential interruption – if the O.D.E. for this film is running at exactly midnight, the song that gives the movie its title will play.

The original film’s production was the aggregate of dramatic arrangements (landscape, sky, actors, props, costumes, interiors, etc.) in front of an optical light-gathering system. This was followed by the chemical fixing of that light on a material substrate circa 1912 (in the case of the movie “The Invaders”). The O.D.E. decomposes the aggregate and stretches the now-digitized film frames in order to tease out movement behaviors. What appears on the screen are visually coherent, dynamic patterns entirely distinct and separate from any representation. These fractal patterns, displayed by means of the O.D.E., can be imagined as historical imprints that were mapped to the material substrate during the actual period when the filmmaking process took place.

The O.D.E.s hack this occult dimension of each film (“occult” in the sense of needing a special key, in this case, an algorithm) to unlock and display some of the film’s behavioral capacities that are only visible through interaction of still frames. It does this by vibrating single-frame images in rapidly alternating pairs while simultaneously stretching the images to various points of decomposition. This constructs a stroboscopic (dazzling) palimpsest of image pairs. Instead of merging on the screen, the low-resolution palimpsests display emergent patterns of coherent and complex movements.

Barbara Lattanzi’s practice involves the production of “idiomorphic” software (a.k.a., cinema software). Her work has been exhibited at many venues including FILE Electronic Language International Festival, the New York Digital Salon, Seoul Net and Film Festival, The New Museum, Squeaky Wheel Buffalo, the Ann Arbor Film Festival, etc. In addition she has applets online at Turbulence.org, Rhizome.org, Runme.org, and Artport (a gatepage link) at the Whitney Museum of American Art, among others. Her software, “C-SPAN Karaoke”, received an Honorable Mention at Transmediale, the Berlin-based international media art festival. Writings about her work have appeared in publications including Millenium Film Journal and Neural Magazine. She has conducted workshops on her software art at the New Media Workshop of the University of Chicago and at University of Southern California Annenberg School of Communication. She lives in Alfred, New York, where she teaches at the School of Art and Design, Alfred University. 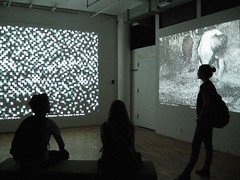 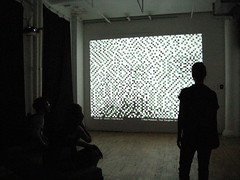 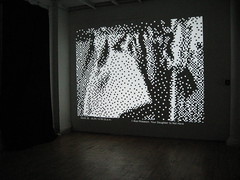