ERS is an open collaborative research project, which investigates hidden physical processes occurring permanently in our everyday environment saturated by electromagnetic waves, especially ionic radiation.  The project investigates the effect of radiation on living organisms that is connected with the influence of this radiation on living cells. ERS is a workshop of sound-visual techniques and practical series of experiments, which consist in detection, amplification, sonic and visual analysis of hidden physical fields – Participants do not need any previous experience with Supercollider i Pure Data (or Max/MSP). Good advanced techniques are very easy.

Workshops of sound and visual techniques, which consist in detection of invisible phenomena and testing of the properties of physical objects through detection, amplification, sonic and visual analysis. This practical workshop and series of experimental situations are meant to equip the artist with DIY skills from the range of techniques such as detection and modulation of the amplitude of electromagnetic emissions for audio and video output.

During the workshop the participants will become acquainted with:

We encourage the participants to bring a device, which emits electromagnetic waves or some way of recording (tape or digital sound recorder, camera, headphones, computer with PD or Supercollider installed.

Robert B. LISEK is an artist and mathematician who focuses on systems and processes (computational, biological, social). He is involved in the number of projects focused on radical art strategies, hacktivism and tactical media. Drawing upon conceptual art, software art and meta-media, his work intentionally defies categorization.

Lisek is a pioneer of art based on AI and bioinformatics. Lisek is also a composer of contemporary music, author of many projects and scores on the intersection of spectral, stochatistic, concret music, musica futurista and noise. He also explores the relationship between bio-molecular technology, code and issues arising from network technologies by combining his DNA code with codes of viruses and recently by testing influence of radioactive materials on biological entities. Lisek is also a scientist who conducts a research in the area of theory of partially ordered sets in relation with artificial general intelligence and complexity theory. 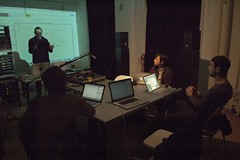 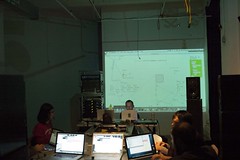 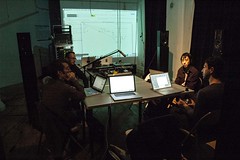